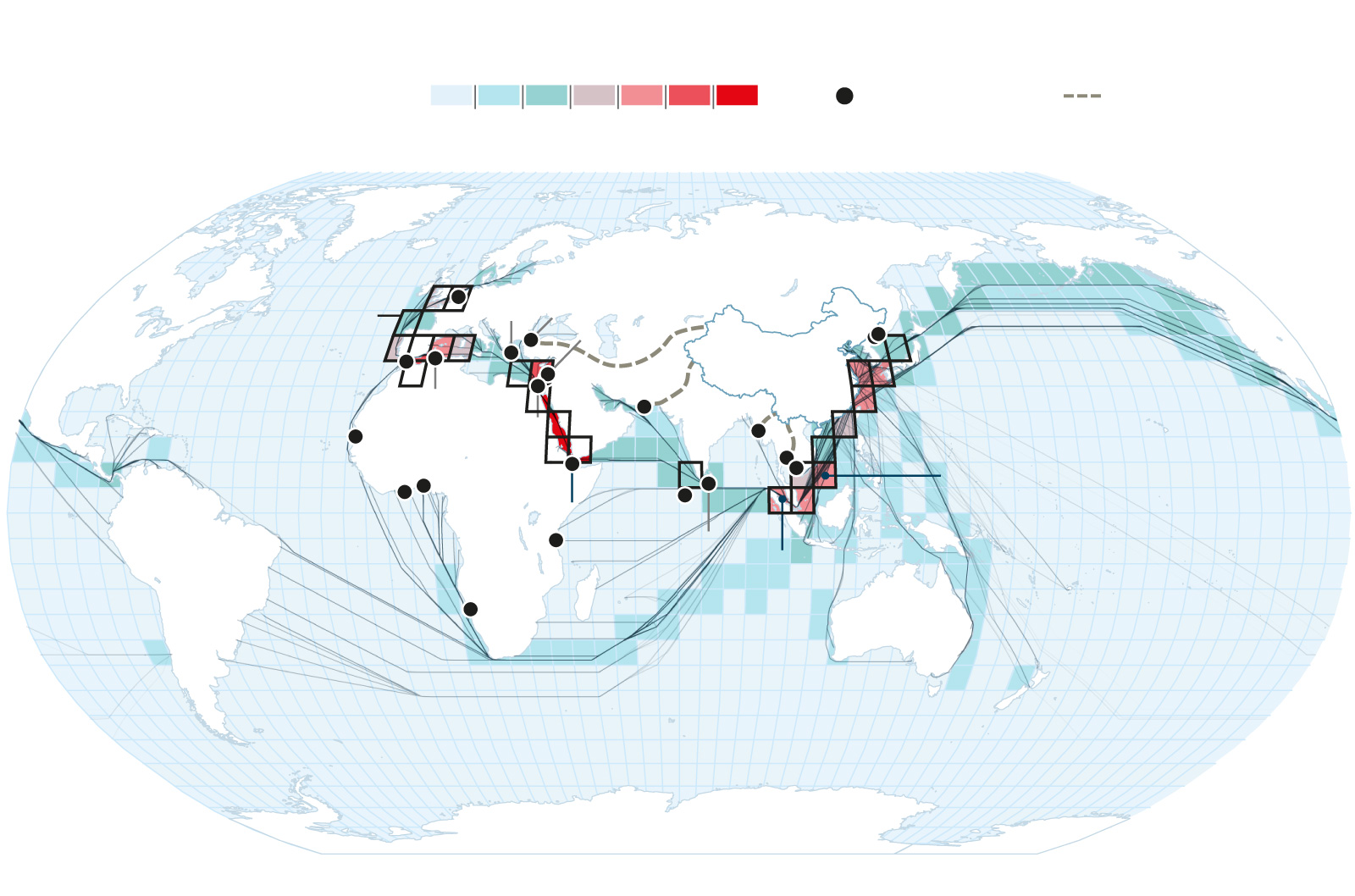 An old saying warns about Greeks bearing gifts, but it might fit the Chinese better. In the 1400s Zheng He, a Muslim slave who became the Ming empire’s admiral, led seven voyages south and west. He offered treasure to every leader he met—but only if they acknowledged the emperor, joining a world order centred on Beijing.
Chinese leaders today are following in Zheng’s wake. The “road” half of its Belt and Road Initiative (bri)—a global infrastructure-building scheme—is a maritime one of seaports and shipping channels. Xi Jinping, China’s president, has said it will create a new model of “win-win co-operation”. Some critics suspect nefarious motives, such as yoking poor countries to China by giving them unrepayable loans.

The bri has evolved site by site and Chinese officials have not made their intentions clear. However, the locations of the 22 maritime-road projects that we have identified as under way show how it is most likely to aid China. They suggest it will be more useful for protecting existing trade routes than expanding Chinese influence.


To measure the maritime road’s impact, we tested three benefits it could offer China. If the road were a resource grab, its projects should cluster in places that sell raw materials that China imports. If its aim were to boost trade, it should track the busiest routes used by Chinese shipping today, or where trade is likely to grow fastest. And if it were intended to secure current trade routes, its ports should sit near choke points—areas whose closure would force goods to travel circuitously—or in places that offer alternative routes.
We tested these explanations by using them to predict if countries host a bri port. The results were conclusive. After holding other factors constant, there was no statistically significant link between having a bri port and exporting raw materials that China wants, or having high current or projected trade with it. In contrast, the “trade-protection benefit”—either the value of Chinese trade in a country’s waters multiplied by the extra distance goods would have to go if those routes were shut, or the amount of trade that would be diverted to a country if shipping were disrupted elsewhere—was a good predictor. Given two otherwise average countries, one with a high trade-protection benefit (like Libya) is 2.7 times likelier to host a bri port than another with an average benefit (like Liberia).
Owning or running a port does not guarantee perpetual access, but it does give China influence by enabling it to disrupt the host’s own shipping if it chooses. Many overland “belt” routes in the bri would also make Chinese trade more resilient. For example, if the Strait of Malacca were closed, China could switch to bri ports it wants to build in Myanmar, and finish the trip on planned bri rail lines.
China’s military footprint also shows a focus on guarding trade routes. Its only base abroad is at Djibouti’s Bab al-Mandab Strait—the waterway whose closure would hurt China more than anywhere else. ■
Sources: Mercator Institute for China Studies; World Bank; Journal of Contemporary China; European Space Agency; US National Centres for Environmental Information; NOAA Geosciences Lab/SOEST, University of Hawaii; The Economist
By Bilge Tonyukuk Enstitüsü zaman: Eylül 27, 2019 Hiç yorum yok:

How many people in the world speak Urdu?


Urdu is the mother tongue or the first language of approximately 9% of the Pakistani population, 7% of the Indian population. This means 18 million Pakistanis and 95 million Indians speak Urdu as their first language. Among the Indian Urdu speakers almost all belong to the minority Muslim community that comprises over 15% of the Indian population.
However the crucial thing to note is that, like English and French, the majority of people who speak and communicate in Urdu daily are Non-native speakers. Urdu serves as a sort of pan-Islamic language in Pakistan and India, which means the vast majority of Muslims in South Asia (except Bangladesh) are fluent in Urdu.
Over 95% of Pakistanis, numbering 190 million, can speak Urdu. Among Indian Muslims at least 80% are native plus Non-native Urdu speakers which translates to 170 million who speak the language.
Interestingly Urdu is the dominant language among Muslims in South India as well, far eclipsing the number of local Muslims who speak regional Dravidian (southern) languages. More than half of South India’s Muslims speak Urdu and Urdu is a co-official language in Telangana.
The Muslim minority of Nepal also speak Urdu and so does the small Bihari community in Bangladesh.
Apart from Indian Muslims a significant number of Sikhs and some North Indian Hindus can also speak and understand Urdu. The common language of the Northern and Central Indian street is Khariboli or Hindustani, a mix of Hindi and Urdu so Urdu is no stranger to Non-muslims in these regions. Urdu being a language of beauty and grandeur is also popular in Bollywood and many famous ‘Hindi’ songs actually sound closer to Urdu.
Altogether Urdu is estimated to 120 million native speakers and 500-600 million second language speakers, giving a grand total of close to 700 million people who speak Urdu as of 2018.
By Bilge Tonyukuk Enstitüsü zaman: Eylül 27, 2019 Hiç yorum yok: