Which languages count in the most interesting ways?


Which languages count in the most interesting ways?


Updated Jan 11, 2018 · Upvoted by Dan Lenski, BA in Linguistics and worked in the speech synthesis industry; I speak English, French, Spanish, an… and Dariusz Wieclawski, MA Linguistics, University of Wrocław (2003)

English, as an Indo-European language, natively uses a decimal system: it counts in units of ten. Two tens is “twenty”, a word originally from the Proto-Germanic *twai tigiwiz - which literally meant “two tens”.
Three tens, likewise, was *þrīz tigiwiz, which later became “thirty”; four tens was *fedwōr tigiwiz, ancestor to “forty”; five tens was *fimf tigiwiz. And so on, up to *niwun tigiwiz. The Proto-Germans’ word for 90 + 10 was *hundaradą, hence English’s “hundred”.
*Hundaradą is in fact linked to the word “ten” as well. The word was a compound of *hundą (“100”) and *radą (“count”), with the first element tracing its heritage to the Proto-Indo-European *ḱm̥tom - also the origin of Latin centumand, through some confusing sound changes, Sanskrit śata. 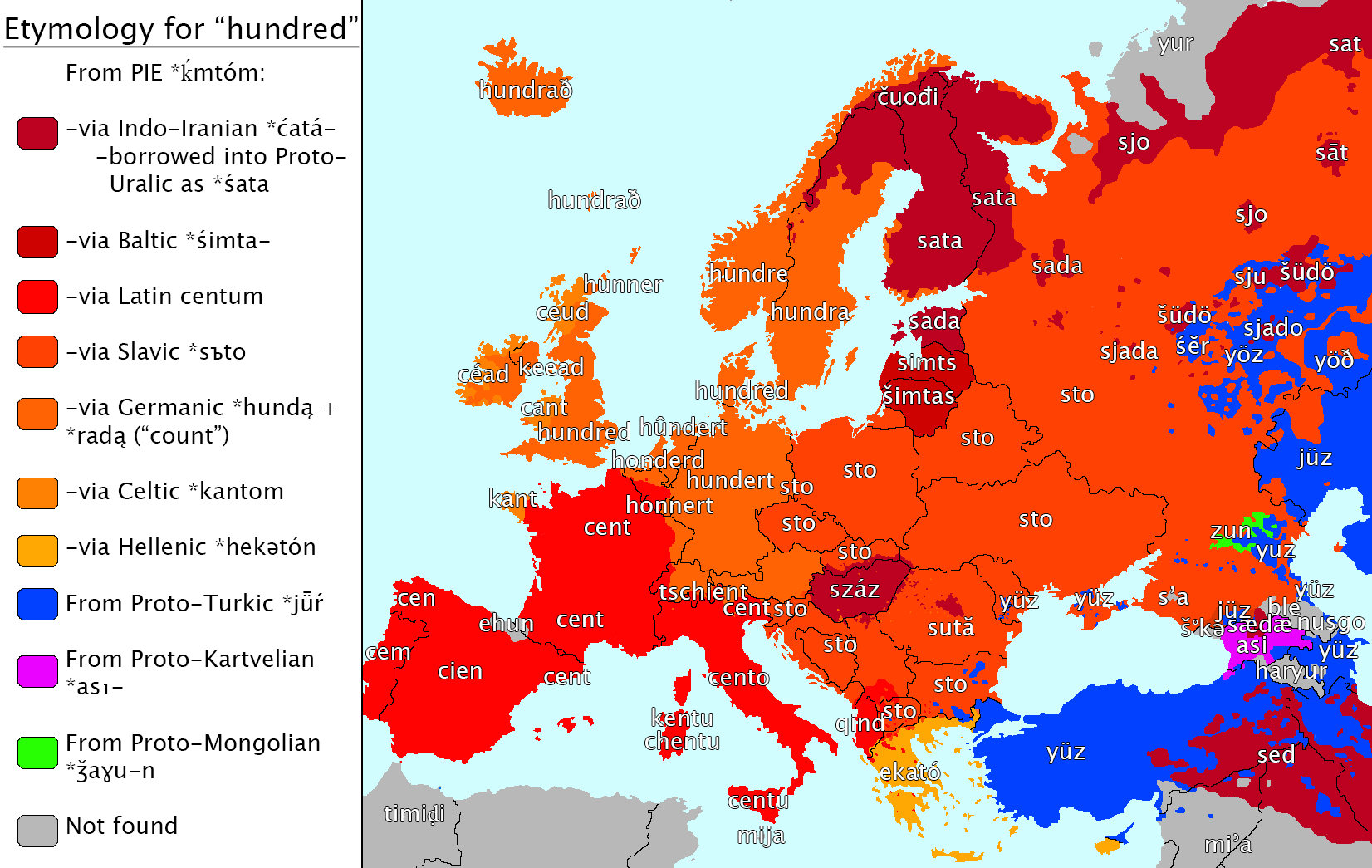 Etymological map of words for “hundred” in Europe. Words in shades of orange are all from *ḱm̥tom. Image from Reddit.
*ḱm̥tom may have originally had a d stuck to the front: *dḱm̥tom. This would make it a form of the *dḱm̥, the PIE word for “ten”: literally “ten tens”.
Other words we get from *dḱm̥ include both “ten” and “decimal”, which brings us right back to the beginning. The decimal system is not only a mathematical convention we’ve adopted; it’s literally built into the English language.
This is not to say the decimal system is the only numeral system, or even the best. One that makes more mathematical sense is the duodecimal (base-12) system.
A problem with the decimal system is that one third is 0.33333… and two thirds is 0.66667… - both difficult numbers. In a duodecimal system, you don’t have such issues: one third is 0.4 instead of 0.33333…; one fourth is 0.3, not 0.25. There is the problem of one fifth being equal to ~0.25, but that’s still a simpler number than what fractions base-10 offers. An example duodecimal multiplication table. Image from Wikipedia.
The Romans - who normally used a decimal system - decided to take the best of both worlds and use a decimal system for normal counting, but duodecimal for fractions. This practice shows up in some Roman-derived imperial units: an inch is 1/12 of a foot, and an ounce was originally 1/12 of a pound.
The word “duodecimal” itself comes to us from the Romans. When Latin became French, “duodecimal” was shortened to doze, which would later form the base of the Old French word dozaine and English “dozen”.
French, as with a handful of other European languages, uses a vigesimal system - base 20 - for its numbers after 50. You don’t say “seventy-five” in French; no, you have soixante-quinze (“sixty-fifteen”) instead. (However, a few francophone nations prefer keeping the base-ten system entirely, so don’t be surprised if you instead hear septante-cinq on a trip in Switzerland.)
Danish is even more erratic in its vigesimality. Who needs “seven-eight” when one can enjoy otteoghalvfjerdsindstyve, literally “eight and four twenties minus half of another twenty” - i.e., .
I suppose that if you need a full equation to translate your numerals, your language counts in an interesting way.
Thanks for asking!
By Bilge Tonyukuk Enstitüsü zaman: Temmuz 28, 2019