Which ethnicity were the imperial dynasties of the Byzantine empire?

Joseph Ward
·
Updated May 2, 2019
Lover of History
Which ethnicity were the imperial dynasties of the Byzantine empire?
The Constantinian Dynasty (r. 306–363) was of Illyrian and Greek ancestry. His father, Constantius, was Illyrian while his mother Helena was likely a Moesian Greek. 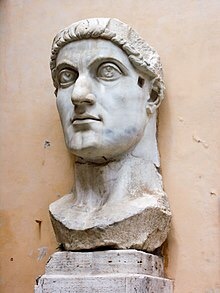 (Constantine the Great, r. 306–337)
The Valentinian Dynasty (r. 364–379) was also Illyrian, with both of Valentinian the Great’s parents being Illyrian. 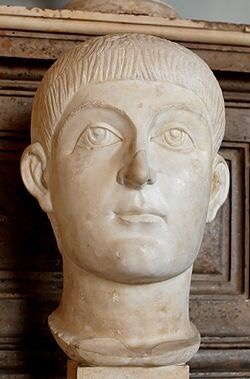 (Emperor Valens, r. 364–378)
The Theodosian Dynasty (r. 379–450) was of Hispanic/Iberian origin, with Theodosius the Great’s father, Count Theodosius, having been born in Hispania. However, the last Theodosian Emperor Marcian was of either Illyrian or Thracian origin. 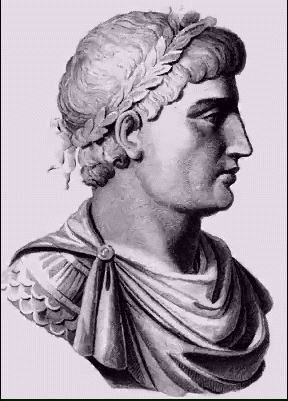 (Theodosius the Great, r. 378–395)
The Empire was headed by the Leonid Dynasty from 457 until 518, but the Emperors were not direct relatives of each other. Leo I, the dynasty’s founder, was of Bessian (a Thracian tribe) ancestry — he was even known as the Thracian in the Imperial court. However, Leo’s successor Leo II and his son-in-low Zeno, were of Isaurian origin (his real name was Tarasis Kodisa Rousombladadiotes), having been an Isaurian chieftain before arriving at Constantinople. The final Leonid Emperor, Anastasius, was a Romanized Illyrian. 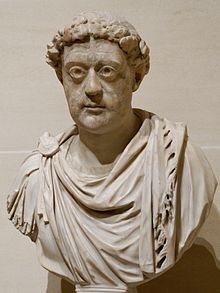 (Emperor Leo I the Thracian, r. 457–474)
The Justinian Dynasty (r. 518–602) originally contained solely Emperors of Thraco-Illyrian origin. Justin, the dynastic founder, was either Illyrian or Thracian and was a swineherd from Dardania before arriving to Constantinople. Justinian I, Justin II, and Tiberius II Constantine were of Thraco-Illyrian origin. However, the final Justinianic Emperor Maurice was the first ethnic Armenian to be on the throne. 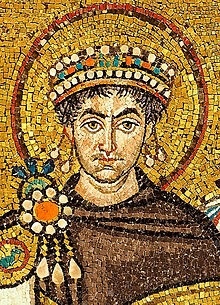 (Emperor Justinian I, r. 527–565)
Emperor Phokas was of Thraco-Illyrian origin, and was the last Emperor to speak Latin as his first language.
The Heraclian Dynasty (r. 610–711) was of Armenian origin. Heraclius the Elder, father of Emperor Heraclius, was of Armenian ancestry although he had become Exarch of Africa. The brief interregnum between Justinian’s reign saw an Isaurian (Leontios) and German (Tiberius III). Between Justinian and Leo III, the Empire had an Armenian and two Emperors of unknown origin sit on the throne. 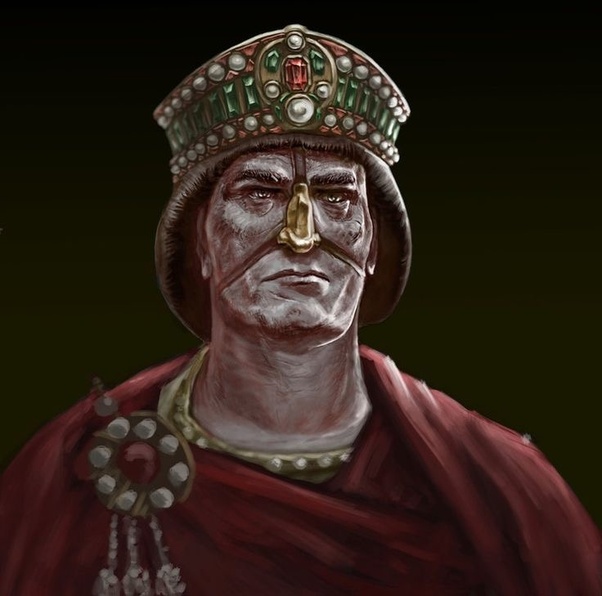 (Emperor Justinian II, the last Emperor of the Heraclian Dynasty; r. 685–695, 705–711)
The Isaurian Dynasty (r. 717–802) was really of Syrian origin, hailing from the city of Germananikea in Commagene (modern-day southeastern Turkey). Leo III and Constantine V were ethnic Syrians, while Leo IV was half Syrian and half Khazar. Irene, the Empress from 797 until 802 and de facto ruler between 780 and 797 was an ethnic Greek. Leo IV’s son, Constantine VI, was of Syrian, Khazar, and Greek ancestry. 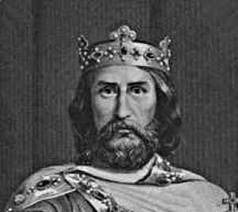 (Emperor Leo III the Syrian, r. 717–741)
The Nikephorian Dynasty (r. 802–811) was likely of Pisidian ancestry, with Nikephoros I’ family hailing from the region although one genealogy traces their origins to the Ghassanids, an Arab tribe that reigned over Southern Syria. The brief dynasty would end with the death of Staurakios in 811. Michael Rhangabe’s origin is unknown. 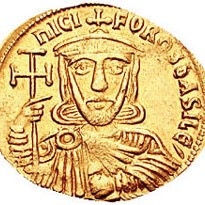 (A coin depicting Emperor Nikephoros I Logothetes, r. 802–811)
Leo V was of Armenian origin, as his epithet “the Armenian” indicated.
The Amorian dynasty (r. 820–867) hailed from the city of Amorium, meaning they were of Cappadocian ancestry. However, Michael III (r. 842–867) was half-Armenian through his mother. 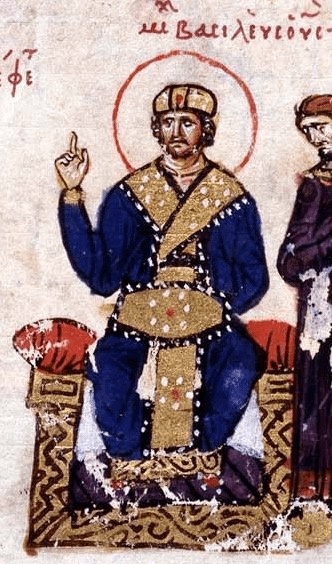 (Emperor Michael III “the Drunkard,” r. 842–867)
The Macedonian dynasty (r. 867–1057) was actually ethnically Armenian, although Basil I had been born in the theme of Macedonia in Thrace. The Macedonians relied solely on Armenians for most of its existence: many of the Emperors that were not directly related to the ruling dynasty were still ethnically Armenians. However, in the last days of the dynasty, the dynasty was controlled by the husbands of Empress Zoe who relied on the Anatolian bureaucracy. Romanus III Argyros was from the province of Charsianon, while Michael IV and Michael V were Paphlagonian. Constantine IX was also Anatolian, as was Michael VI. 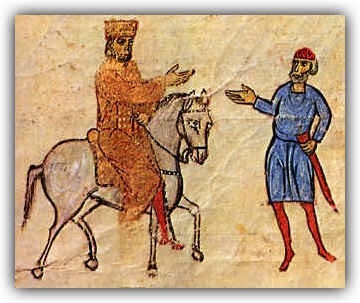 (Emperor Basil I “the Macedonian”, r. 867–886)
The Doukas dynasty (r. 1059–1081) was primarily of Greek origin. Constantine X was an ethnic Greek, although Romanus IV Diogenes was a Hellenized Cappadocian. Michael IV and Nikephoros III was also likely Greek. 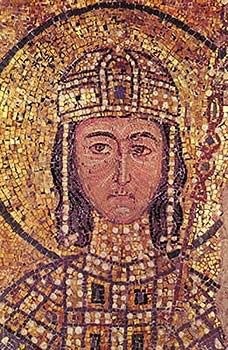 (Emperor Romanus IV Diogenes, r. 1067–1071)
The Komnenos dynasty (r. 1057–1059, 1081–1182) was originally of Thracian origin (they were from the village of Komne), but through extensive intermarriage with the Anatolian dynatoi they became completely Hellenized. By the time of Isaac and Alexios Komnenos, they were almost completely ethnic Greeks. John Komnenos was a quarter Bulgarian, since his mother was half-Bulgarian. Manuel Komnenos was also half-Hungarian, as his mother was a princess of Hungary. Manuel’s son, Alexios II, was half-Frankish through his mother. 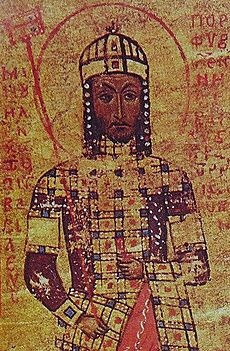 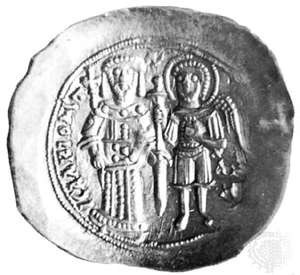 (A coin depicting Isaac II Angelos, r. 1185–1195)
The Palaiologos Dynasty (r. 1259–1453) were of Greek ancestry. This was not surprising, as the aftermath of Manzikert resulted in the fall of the Empire’s Eastern Anatolian, Syrian, and Armenian lands. Extensive intermarriage did dilute this, however: Andronikos III was half-Armenian through his mother, John V’s mother was a Princess from Savoy, and both John VIII and Constantine XI Palaiologos were half-Serb although both were extensively Hellenized. After the fall of Constantinople, the Palaiologi would immigrate to Italy and become Italianized, ruling as the feudal lords of Montferrat until 1566. 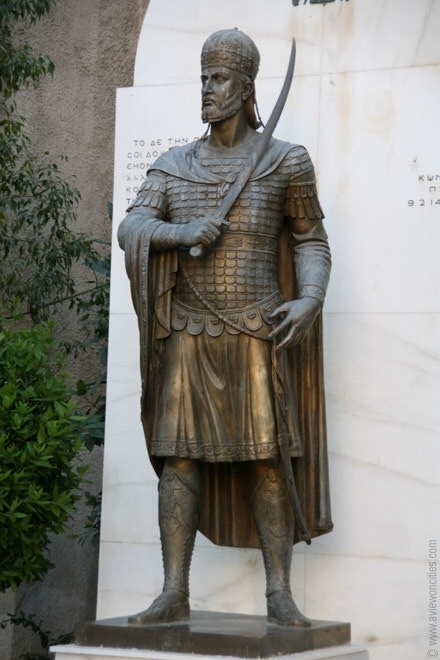 (A statue of Emperor Constantine XI Palaiologos, r. 1449–1453, the last reigning Roman Emperor.)
The ethnic backgrounds show us the power dynamics of Byzantium. For most of the Empire’s early history, for instance, the throne was dominated by Thracians or Illyrians. Later throughout the Empire’s history, with the lost of these provinces to the Avars and Slavs, the Empire became dominated by ethnic Armenians because they were from the Arab borderlands, enabling them to become war heroes and rise through the political structure. Finally, with the fall of Eastern Anatolia and the Empire’s Armenian lands, the Empire was dominated by ethnic Greeks (it should be noted, however, that “Greek” is a modern term and during the medieval ages applied to people from Western Anatolia as well because of the extensive Hellenization of the region carried out during antiquity).
7.8K views
View Upvoters
View Sharers
By Bilge Tonyukuk Enstitüsü zaman: Temmuz 23, 2020